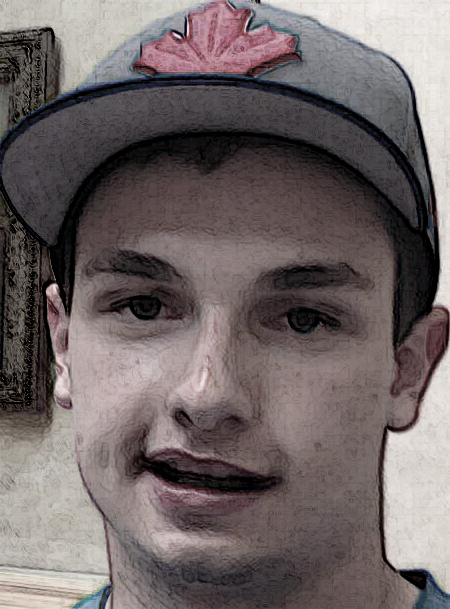 mickeymouse real name Konrad (pronounced con-rat), commonly refered to as cuckrat is a Polish-Canadian, trash tier rizon user sometimes found in #/g/tv. Unlike most users who have at least some respect from members of the rizon community mickeymouse is almost universally disliked even by the users that he is closest to. This is similar to real life where Konrad is viewed as a joke by his peers and a creep to women.

mickeymouse hails from Canada but is of Polish ancestry. A truly sickening combination. Due to his unfortunate genetics mickeymouse is ugly on the inside and the out, his awful personality mirrored by his ugly, subhuman, slavic appearance. He is also a manlet and stands only 5'11"

Like most slavs, mickeymouse has an extremely weak chin: commonly referred to as "beta-face". His weak facial structure eliminates any chances of successfully online dating as his face automatically signals low value male. Were he taller and more intelligent he may be able to offset his truely revolting face but having a typical polish IQ of somewhere in the mid 60's, he's as dumb as he looks.

This mixture of hating women while simultaneously viewing them as goddesses to be worshipped severely warped his mind and left him devoid of normality and personality. His low IQ and lack of sanity make conversing with him difficult, a challenge left only for the more manipulative users who hope to mold him into a Canadian elliot rogers.

Relationship to Other IRC Users

mickeymouse can be found in many channels accross rizon. Unlike many users who have a "main channel" mickeymouse has no particular channel loyalty, this is probably because his severe personality deficits make it difficult for mickeymouse to form online friendships and is usually quickly disliked by the users of a channel shortly after joining. Despite he can often be found in #/g/tv as Erotica fosters his decent into insanity and encourages the development of his more deviant behavior.

mickeymouse, when feeling more sane sometimes attempts to be connoisseur of art, literature and film. This is likley because, like most low IQ people mickeymouse wasted a significant portion of his life in an university echo-chamber/hugbox. However despite this interest mickeymouse is often unable to comprehend the work that he is critiquing and quickly devolves into attacking others for actually understanding the artwork.

mickeymouse also enjoys defending Poland and Canada. While mickeymouse knows that deep down both Poland and Canada are shit-tier and worthy of the mockery they receive he defends regardless, probably in a frivolous attempt to convince himself that his terrible genetics and culture have some redeeming qualities. When the stupidity of his race, country and culture overwhealm him he abruptly leaves rizon, probably to cry and pay prostitutes to spit in his ugly face.

mickeymouse often likes to pretend that he is some kind of IRC master manipulator and that he is a puppet master of users like Erotica and hochi. While these users may play along with mickeymouse's deluded fantasy of grandeur they usually mock him throughout and laugh at him either behind his back or to his face.