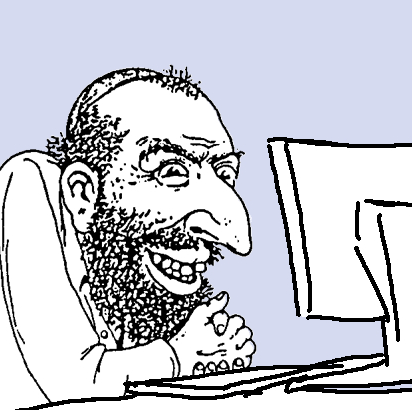 Erotica is a Jewish user obsessed with "breaking" users and ruining #/g/tv by letting lots of shit tier users such as BallSac, Quil, etc. He conspires and uses his Jewish instincts to seize power in various channels trying to break zingas. Erotica is a confirmed JIDF agent in charge of shitting up rizon. He has gained power in #/g/tv, #/vg/, and #/pol/.

After all the regular users left in 2014 including Leanpocket, tab was left to hold down the fort.In a fit of faggotry and unwillingness to actually run the channel he handed Dr_Venture and Erotica in charge of the channel. Dr_Blogger has since gone on to be a normie and has more or less left #/g/tv for good leaving only Erotica in charge leaving the channel in permanent chaos.

Chaos in the Kingdom, Oper Pressure

/g/tv quickly became filled with trash tier users like BallSac and Quil leading to massive chaos, op wars, drama etc. In addition, the increasing pressure from zingas's faggotry (mainly masshilights and invites) eventually attracted the opers and Erotica gave into the opers. Why didn't he just ban zingas and the other drama makers? Because he himself is a massive faggot.

Erotica is a typical Jewish user. While he is hellbent on making #/g/tv even more of a cesspool than it is, and is obsessed with "Breaking" people, what he doesn't realize is literally no one cares and #/g/tv can't get any shittier.